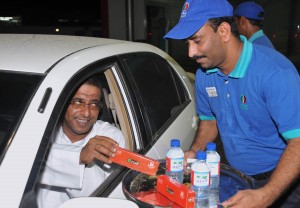 A gas station attendant at a Dubai gas station (name withheld) has been sacked for pocketing a Dh10 (N427.84) tip. Santosh Kumar, 24, said he was terminated on the first week of his job after his supervisor found Dh10 hidden inside his socks.

According to him, attendants at fuel stations run by the Dubai-based Emirates General Petroleum Corporation are routinely strip-searched for tips.

“I was subjected to this humiliation on my first day at work. My supervisor took me to a storeroom after duty hours and asked me to remove my shirt and vest. Then he gestured me to take off my pants. I was near tears. When I refused, he ordered me to jump five times to shake off any coins I might be hiding,” recalls Kumar.

Many other attendants confirmed undergoing the demeaning treatment, saying their company policy forbids them from pocketing tips.

“Last week, there was a shortage of Dh100 (N4278.40) at our station. All of us were taken to the store room and stripped naked by the supervisor. He even asked us to remove our underwear. It was so shameful I wanted to die,” said Bashir who works as an attendant at an Emarat (not real name) gas station in Dubai.

The attendants said as per their company policy, all tips collected by staff should be surrendered to the company.

“They made it clear during our training. But since our salaries are low, the temptation is always there,” said Kumar who joined the company on a Dh1,000 (N42784.00) salary.

Commenting on the issue, Emarat said their employees are well aware of the rules and regulations that they are expected to follow from the time they are hired.

“Our stance on tips is addressed and explained during the training that follows after a staff is recruited and is a part of our internal operating procedures. We expect our employees to deliver the highest level of customer service standard and do not want tips to cause any discrimination or bias in the service offered to customers. The corporation goes to great lengths to ensure that our staff are treated with love and care and any little money generated as tips is reinvested into staff welfare and entertainment funds,” Emarat said in a statement to XPRESS.

However, attendants claimed instances of staff being frisked and caught trying to sneak out with tips are routine. “You are made to stand like a thief as they dig into your shirt, pants and even socks after a day’s work,” said another attendant, Rahman.

According to lawyers no company has the right to strip search employees, adding that the practice violates human rights.

“These acts are considered immoral and illegal as they violate human dignity and honour. Nobody has the right to conduct strip-searches as it is a violation of human rights. Only the police are authorised to do it.

“Those who underwent such an act should complain to the police immediately,” said Mona Yahya Mohammad, legal adviser, Bin Ismail Advocates and Legal consultants.

Fuel depot staff alleges the supervisors at each depot are authorised by the company to frisk their juniors. Strip-searches are carried out randomly to confiscate tips not surrendered by the staff. In addition, there are spot checks at fuel pumps when workers are serving customers.

“There are surprise checks even on buses taking us back to our accommodation and people get caught if they managed to get away in the first round of checking,” said Vaishna, another staff.

But the humiliating practice of strip search and rigorous monitoring are not deterring the staff from making a few extra bucks through tips. “We keep devising new methods to hide the money. We are doing it not because we are dishonest. We genuinely believe we are entitled to the tips we get for our good service,” said Vaishna.

Fuel distributors like Epco, Enoc and Abu Dhabi-based Adnoc do not have similar ‘no tips’ policy and their staff told XPRESS they are never frisked. [XPRESS, GN]