According to the Electoral Commission, EC Chairman, Dr Kwadwo Afari-Gyan, he polled 5,574,761 or 50.70 per cent of the valid votes to win the hotly and tightly contested election. 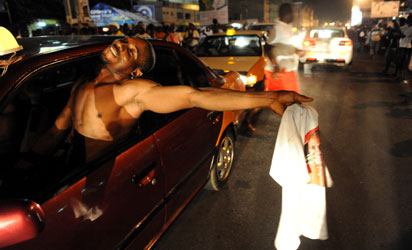 Leaders of the NDC, who thronged the packed EC conference hall where the results were declared at 9.54 p.m (10.54 p.m Nigerian time) said from next year, Ghana would witness massive infrastructural development.

Leaders of the NPP shunned the event.

Jubilant supporters of the NDC poured into the streets in wild celebration as the results were announced. They had early built platforms and stands across the city where bands played interrupted music till this morning.