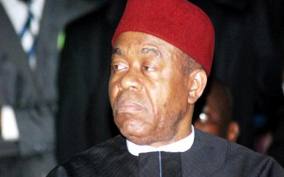 Abia State governor, Theodore Orji has disclosed that plans have been concluded to demolish 1,800 structures in Aba, the commercial nerves of the state.

As an explanation for this move, the governor said it is designed to give Aba the new face that the Commercial centre of Abia State ought to wear, just as he said that sixteen roads have been marked for reconstruction in Aba.

The governor’s Chief Press Secretary Ugochukwu Emezue while speaking with Journalists in Abuja explained that governor was on top of governance and development in the state in this 2nd term. He however argued that allegation that the governor was not performing came as a result of the fact that he never met anything on ground to build on, adding that the governor spent his first term in litigation over his election as the substantive governor.

Emezue also disclosed that one of the things hindering performance in Abia State was the N30 billion loan that the governor at the moment was servicing; he said the debt was inherited from the previous administration of Dr. Orji Uzor Kalu.