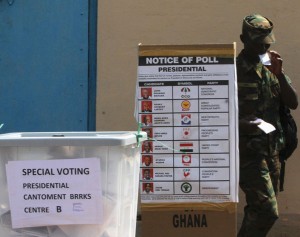 The people of Ghana will on Friday December 7, 2012, go to the polls in order to elect a new head of state. This will be the country’s sixth election since 1992, the year it fully embraced multi party democracy.

Ghanaians went to the polls in 1992, and voted, choosing Jerry Rawlings, who prior to becoming a civilian leader, had ruled as military leader of the West African nation for years. Rawlings had served as head of state from 1979 to 1981 and from 1981 to 1992, all as a military leader, and then as the first elected president of the Fourth Republic of Ghana from 1993 to 2001.

In the last twenty years, and from 1992, the Country has elected five heads of states, shared between the two main parties the National Democratic Congress (NDC), formerly referred to as the Provisional National Defense Council (PNC), and the New Patriotic Party. However, surprisingly, Ghana has managed, with some level of carefulness, to elect its leaders in a manner that is far different from the mess witnessed during the military era.

This Friday, about fourteen million Ghanaians out of the over twenty four million, will go to the polls to elect a new leader. It is a straight fight between the ruling National Democratic Congress and the opposition New Patriotic Party, as the six other contesting parties barely make an impact.

The two leading candidates John Dramani Mahama, the incumbent who acted as Vice President during Mills’ reign, and Nana Addo Dankwa Akuffo Addo, leader of the opposition NPP, are confident the electorates will do the most obvious thing of voting them into power