The maker of a Google app thinks it’s fun to make yourself look Asian by changing the shape of your eyes and wearing a Fu Manchu mustache and rice paddy hat. Or you could be a Native American with brown skin, war paint and a feather headband. 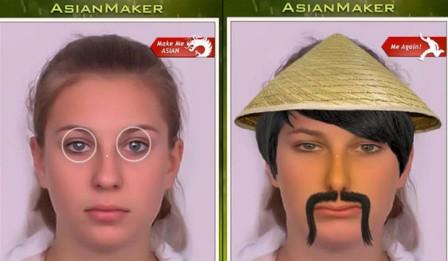 “This is just a fun app that lets you indulge you and your friends,”- says the description of the “Make Me Asian” app created by user KimberyDeiss and available on Google Play. There are also photo-altering apps including “Make Me Old” and “Make Me Fat”, “Make Me Russian” and “Make Me Irish” which play off stereotypes.

“You can for a few seconds to make yourself a Chinese, Japanese, Korean or any other Asians,” – the description says.

Not amusing or cute, say Asian-American organizations that launched a petition to get Google to remove both apps. The apps use dated and racist stereotypes of Asians and Native Americans, said the online campaign 18 Million Rising, named after the number of Asian-Americans in the United States.

“These racist and offensive portrayals of Asians and Native Americans perpetuate damaging racial stereotypes and should not be distributed on the Google play store,” – said the campaign, which has an online petition to remove the apps.

Google, however, said the apps are not in violation of the company’s policies that protect against hate speech.

“We don’t comment on individual apps. We remove apps from Google Play that violate our policies,” – Google said in a statement.

But the furor in the Asian-American community, sparked a few weeks ago, is growing. Blogs, including Angry Asian Man, have reinforced the call to remove the apps.

Washington pastor Peter Chin decided to mount an even larger protest on the website Change.org. Chin said he understood Google’s motto is “Don’t be evil.” That makes it hard to fathom why the company would support these apps, he said. This is the first time Chin has protested in this way. He was prompted to act, he said, because Google refused to do so.

“Google normalizes everything from Google maps, Gmail,” – he said. “If you want to search for something on the Internet, you even say “to Google it.”

Chin feared Google’s power would make people think the apps were OK. He wants Google users to know that the stereotypes in the apps have been used to marginalize and discriminate against people.

“I wanted to make sure this app isn’t given a pass of approval. It’s not cool,” – he said.