Home Metro News Insecurity: People who have grievances against the government should come out… –...
Facebook
Twitter
WhatsApp 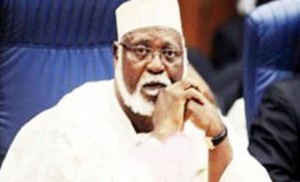 General Abdulsalami Abubakar, a former Military Head of State, has decried the security situation in the country, which he said was affecting the national economy, especially that of the northern part of the country.

General Abdulsalami stated this in Minna, Niger State, on Tuesday after he and other eminent Nigerians including Alhaji Aliko Dangote, Chief Sunny Okogwu, a retired deputy Inspector General of Police and others were inaugurated as members of the Endowment Fund Board of Trustees of Ibrahim Badamasi Babangida University, Lapai, by Governor Muazu Babangida Aliyu. He stressed that in the northern part of the country in particular “there is no more night economy.”

He then noted that the destruction of public and private property, including the termination of innocent lives should be stopped, adding that “People who have grievances against the government should come out to discuss the grievances and settle for peace.”

Meanwhile, speaking further on the assignment of the endowment fund, General Abubakar observed that there were nine projects yet to be completed in the university among which are the senate building, central water works, lecture theatres and lecture rooms as well as the vice chancellor’s lodge. He urged the Niger State government to set the ball rolling by contributing to the fund and ensure regular funding of the institution.