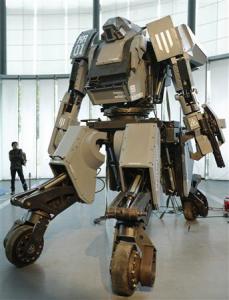 Like many Japanese, Kogoro Kurata grew up watching futuristic robots in movies and animation, wishing that he could bring them to life and pilot one himself. Unlike most other Japanese, he has actually done it.

His 4-tonne, 4-meter (13 feet) tall Kuratas robot is a grey behemoth with a built-in pilot’s seat and hand-held controller that allows an operator to flex its massive arms, move it up and down and drive it at a speed of up to 10 kph (6 mph).

“The robots we saw in our generation were always big and always had people riding them, and I don’t think they have much meaning in the real world,” said Kurata, a 39-year-old artist.

“But it really was my dream to ride in one of them, and I also think it’s one kind of Japanese culture. I kept thinking that it’s something that Japanese had to do.”

His prototype robot comes equipped with an operating system that also allows remote control from an iPhone as well as optional “guns” that shoot plastic bottles or BB pellets and are powered by a lock-and-load system fired by the pilot’s smile.

The robot, which took two years to pull together from concept to construction, also comes with a range of customized options from paint scheme to cup holders.

It isn’t cheap. The sticker price for the most basic model alone is around 110 million yen ($1.3 million).

Kurata said while he has received thousands of inquiries about buying a robot, he’s also received a large number of cancellations and declined to specify how many people have actually bought one.

But that’s not so important.

“By my building this, I hope that it’ll sort of be the trailblazer for people who can do more than myself to make different things,” he said.

“They might be able to make a society that uses robots in a way I can’t even imagine. I expect more from the implications of building it than from the robot itself.” [Reuters]