Loya milk, from the stable of Promasidor Nigeria limited has officially unveiled Don Jazzy as its new brand ambassador at a breathtaking event which took place on Friday in Lagos. Don Jazzy, who was palpably excited about the appointment eulogised Loya milk for the honour and pledged to play his new role creditably. 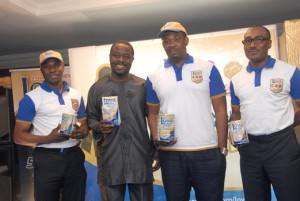 Loya milk has also started an online promotion. All consumer and members of the public need to do is to like loya milk on www.facebook.com/loyamilk OR log on to the promo sitehttp://www.tasteyourdream.com/
Speaking at the splendid event which was attended by Don Jazzy’s father, Wande Coal and other members of the Mavin crew, the Commercial Director of Promasidor Nigeria limited, Mr. Kachi Onubogu said, “Our choice of brand ambassador is driven by the essence of the brand and its proposition to its target audience”.
Continuing the Commercial Director said “ Loya premium milk is a brand with class and taste; it is a brand with distinction and excellence, a brand that constantly rewards its loyal consumers. In 2011, Loya milk brand rewarded Nigerian consumers with a total of N50m in INSTANT CASH PRIZES. Loya milk brand is therefore a brand that is loved and well respected by consumers”.
Commenting on the online promo, Onubogu said “from December 1st till 31st December an on-line promotion kicks off. All a consumer needs to do is to like us on www.facebook.com/loyamilk OR log on to the promo site http://www.tasteyourdream.com/. Enter their details- Name, Phone number and e-mail address. Each winner stands a chance win Samsung Galaxy S3 Smartphone, One night in a hotel and an opportunity to be in a Loya TV commercial with Don Jazzy.
On his part, Don jazzy stated that there is a lot of synergy between Loya milk and his personae and promised to be a good ambassador of the brand.