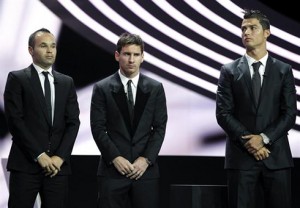 FIFA has revealed the names of the three players who remain in the race to win the World Footballer of the Year award 2012. They are Andres Iniesta (Spain, FC Barcelona), Lionel Messi (Argentina/FC Barcelona) and Cristiano Ronaldo (Portugal/Read Madrid)

The winner will be revealed at the FIFA Ballon d’Or gala as part of a televised show at the Zurich Kongresshaus on 7 January 2013. Who do you think should win this year?