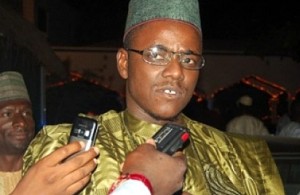 Latest reports have it that Aminu Sule, the son of Jigawa State governor, Sule Lamido who was arrested yesterday for money laundering at the Kano International Airport has been released. He was released on bail today after the Economic and Financial Crimes Commission (EFCC) filed charges at a Federal High court in Kano.

EFCC officials have revealed that Aminu was on administrative bail as there were no judges available to take his plea today due to the “judges conference” taking place in Abuja.

Meanwhile, his father, governor Sule Lamido had earlier made a release in which he faulted media report that Aminu Sule, arrested at Malam Aminu Kano International Airport for carrying fifty thousand US dollars ( $50,000) on him while on his trip to Egypt was on a money laundering mission on his behalf.

The official statement was signed by malam Umar Kyari, Director of press to Governor Lamido.