A mysterious fire on Saturday gutted the Abakaliki station of the Nigerian Television Authority, NTA, destroying broadcast equipment and furniture worth millions of naira. 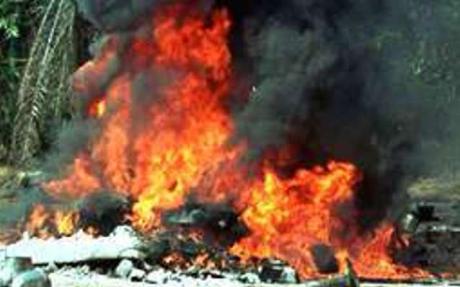 We gathered that the fire which was sparked by an electrical fault in the studio, around 9pm while the station was on air, quickly spread to other sections and immediately took the station off air to the bewilderment of viewers at the time.

A distress call was reportedly put across to the Ebonyi State Fire Service office located about eight kilometers away but after battling the raging fire, they soon ran out of water and had to drive back to station to refill while the devastation continued.

On their arrival nearly 45 minutes later, the entire studio and master control room, had been gutted just as it took the firemen another painstaking 30 minutes to put out the fire.

Equipment said to have been destroyed in the fire include: video cameras, three monitors, microphones, props, underground cables and studio lights.

Meanwhile, Governor Martin Elechi of Ebonyi state yesterday paid a sympathy visit to the television station in Abakaliki, describing the incident as unfortunate.

At the time of this report, an unconfirmed report revealed that the NTA headquarters in Abuja had directed the immediate arrest and detention of all the security men on duty when the fire incident occurred.