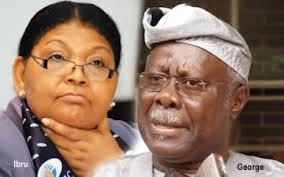 Despite the fact that the Presidency was reported to have ordered a compilation of the names of holders of National Awards who have been found guilty of one crime or the other, the names of a former National Deputy Chairman of the Peoples Democratic Party, Chief Bode George, and other ex-convicts, are still on the national honours list, The PUNCH reported.

According to the Punch, other prominent convicts whose names are on the list are a former Inspector-General of Police, Tafa Balogun; ex-Managing Director of Oceanic Bank, Cecilia Ibru; her former counterpart in the defunct Intercontinental Bank, Erastus Akingbola; and other ex-managing directors of banks convicted after they were conferred with the national honours.

However, investigation by The PUNCH showed that the committee had not been able to meet to carry out Jonathan’s order. It was also gathered that 21 recipients of the 2010 and 2011 National Honours awardees had yet to receive their medals more than one year after they were conferred with the awards. Eighty per cent of the awardees came from the public sector as either public officers or political appointees.