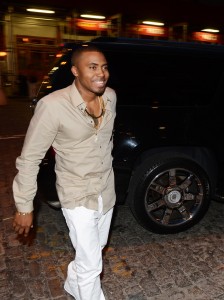 What’s with artists getting part payment for shows and failing to turn up? Allocco is very angry now, and Nas has to appease him with $10m.

Nas is being sued for a hefty $10 million by concert promoter Patrick Allocco, who says he was kidnapped when the rapper failed to show up for a scheduled New Year’s Eve concert Allocco organized in Angola.

Allocco, a native of New Jersey, says he was kidnapped at gunpoint and held captive for two months after Nas pocketed around $300,000 for a performance in the African country, but then never showed.

Allocco and his son were held captive in a $500-a-night hotel by Angolan music promoter Henrique Miguel. However, the Alloccos were denied refuge by the American Embassy because the Embassy believed that the pair was not at risk for serious harm.

Allocco paints a different story, where he suffered both financially and physically.

In his lawsuit he claims he was beaten and threatened regularly. His absence lead to the foreclosure of his home and also the loss of his company.

No word yet from Nas on the charges.