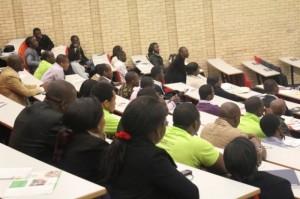 The Committee of Vice Chancellors of Nigerian Universities, CVC, on Saturday said that Nigerians spend an average of $500 million annually as students of European and American universities.

A communiqué signed by Professor Michael Faborode at the end of a two-day Consultative Policy Dialogue on the Future and Relevance of the Nigerian Universities and other Tertiary Institutions, organised by CVC and Trust Africa, Dakar, simply parroted Onyechere, and broadened the expenditure to cover what Nigerians spend in the entire EU and America, Guardian news reports.

The vice chancellors added that the amount was about 70 per cent of the total allocation to all federal universities in 2008.

The communiqué said that this was an indication of the loss of faith in Nigerian universities as shown by the rush for foreign institutions, even to other African countries, adding that constant restiveness of students between host communities, school administration, weak governance structure and processes were some of the challenges facing the Nigerian Higher Education Sector.

The communiqué pointed out these have contributed to disruptions of the academic calendar, including the constant bickering between the academic staff union, other staff unions, university management and government.

The VCs said that this had thereby affected the culture of robust debate and collaborative engagement between government, university management and staff for a common vision and progress.

The committee resolved to restore a culture of consultation, strategic productive engagement, and partnership, collaboration between management and staff of Nigerian higher education institutions.

It also resolved that the nature and dimension of the problems confronting higher education institutions in Nigeria would require a new approach to governance.

The communiqué also resolved that the appointment of vice chancellors must include respect for academic excellence, managerial and leadership capabilities, transparency and accountability.

It said the other problem plaguing university education was the negative application of the principle of federal character, which breeds sectional agitations and clamour for indigenes and other parochial interests.

The committee also resolved that as much as possible, “indigene-ship” should not be critical in the appointment of vice chancellors.

It resolved that government must invest in the future of the country by providing adequate resources to enable universities achieve their goals.

The VCs said that stakeholders and private sectors should be committed to investing in higher education through sponsoring of research.

It also resolved that government needed to be more cautious in the current trend of establishing and approving of new universities without commensurate increase in the number of teachers.

The VCs believed that the higher education sector had a critical role to play in forging a sense of nationhood, and nation building as well as citizenship.

It also recommended that regular consultative policy dialogue on Nigerian Universities and other tertiary institutions should be held biannually. [VN]