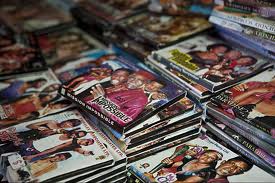 Those in the business of pirating other people’s videos in Onitsha may be in for a big one as the Film, Video, Producers and Marketers Association of Nigeria (FVPMAN) has declared war against pirates in Onitsha, Anambra State. And, the marketers have vowed never to rest until they stamp out the menace of piracy in the commercial city.

According to the Chairman of the Onitsha branch of FVPMAN, Mr Godson Nwosu, following the alarming rate at which its members are being forced out of business, no thanks to the illegal activities of the pirates, they are left with no choice than to clampdown on the enemies of their businesses.

He said the marketers recently carried out raids on the hideouts of some of the pirates in Onitsha, in what they call, “operation flush out pirates” and carted away DVD worth millions of naira from the culprits. The raid, which he said led to the arrest and detention of two suspects started two weeks ago. He vowed that the exercise will not stop until they have brought their illegal activities to a standstill.

His words: “We have lost millions of naira to the pirates who have taken over our businesses. As a result, we will not stop the fight against piracy until they have flushed them out.”