Some ‘sharp’ men have started taken measures to keep their wives out of the ‘many sins’ associated with the social media. One of such men is Nollywood actor, Charles Abazie. 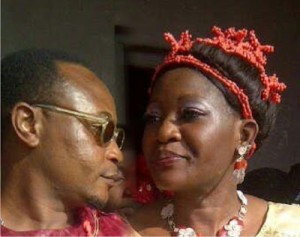 The actor, who’s advance in age, got married to his Edo State-born lover, Beatrice, on Friday 2nd November, 2012, at her family compound in Benin City.

The crux however is that the actor doesn’t seem to trust his wife enough to allow her continue to fraternize with her “friends” on the social media.

Insider sources revealed that Charles, probably scared of loosing Beatrice like his former girlfriend to bad guys on the social media, ordered his new wife to take down her facebook account immediately.

And guess what? Olufamous.com gathered that the wife had no choice for the sake of her marriage. Beatrice, according to records on the popular social networking site, have since closed her account.