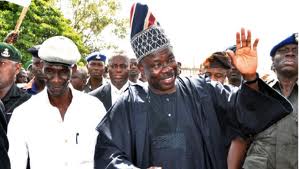 In a very welcome development which should actually be emulated by neighboring Oyo State government and the Federal Capital Capital (FCT), the Ogun State Government has begun the construction of ultra-modern markets to accommodate traders whose shops had to give way for the expansion and reconstruction of roads in various parts of the State.

This was made known by the state governor, Ibikunle Amosun, during his sensitization tour to some of the affected markets. He noted that the shopping complexes would be constructed at Itoku, Sapon and Omida markets respectively in Abeokuta.

The governor also pointed out that the State Government had acquired two other locations close to the former sites of the affected markets in Sagamu, Ijebu-Ode and Ilo-Awela where the road expansion projects are on-going, saying that the gesture was to ensure that the traders were not completely uprooted from the areas where they were plying their various trades.

He then said in line with the Ogun Standard, the shopping malls will be provided with toilets and all other facilities that could be found in any shopping complex in the developed countries; assuring that the construction of the Sapon ultra-modern market which has kicked-off would be replicated in other areas.