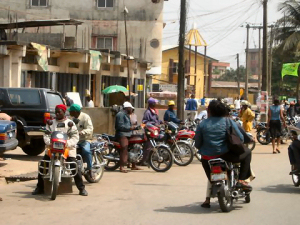 Even as some stakeholders are planning to flag off a nationwide protest against the ban of commercial motorcycle operators popularly known as “Okada” in some parts of the country, Markets’ leaders in Onitsha, the commercial nerve centre of the South-East, have banned commercial motorcyclists from entering their markets during the Christmas season.

According to a correspondent of the NAN, who went round the major markets in Onitsha on Monday, the commercial motorcyclists popularly known as ‘okada’ have been asked to stop at least 500 metres from the entrances to the markets by the vigilante group in each of the markets. The markets visited included; Main Market, Head-Bridge Markets, Ogbaru Main Market, Ogbo Efere Market, Ose Market, Ochanja Market and Marine Modern Market.

Meanwhile, Mr Vincent Ifeme, Chairman, Marine Modern Market, told NAN that the ban was one of the security measures adopted by market leaders in order to safe-guard customers from hoodlums, who operate with motorcycles.

Ifeme said that customers had been advised to withdraw their cash in banks in the markets and immediately convert their cash to goods by making purchases.