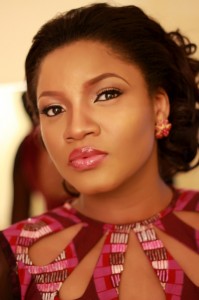 Nollywood star Omotola Jalade Ekeinde yesterday had a Q&A session with her twitter fans at 4pm. Call it end of the year gift, Omotola answered some personal questions, and her answers seemed as truthful as they could get.

Omotola’s reality show, ‘Omotola The Real Me’ has enjoyed massive views with several fans asking for additional stations to air the show. The twitter Q&A confirmed to Omotola how much her fans adore her and how eager they are to know ‘stuffs’ about her.

In a session that lasted hours, Omotola was asked questions many celebrities would normally shy away from answering, and she answered almost all, the ones she didn’t answer, she said would come up in her memoir.

Fans asked about her relationship with Genevieve that many fans believe it’s sever. While Omotola didn’t say they are good friends, she also didn’t say they are not. “Thanks, we cool” was the answer she gave, and to every other fan who asked she just said they were cool. Diplomatic uh?

And whoa! Omotola isn’t threatened about anyone’s backside in Nollywood, even Mercy Johnson, the example given by the fan who asked the question. Omotola says she’s proud of her body, her eyes being her most prized possession, though some people she said thinks it’s her b*m.

Her take on plastic surgery was news recently and there were reports she was considering having one. Omotola says the only thing she said about it was, “nothing wrong with it if you need it.” That doesn’t mean she wants it, right? Why would she even when she’s faultlessly beautiful like some fans say?

According to Omotola, she met her husband in the church in 1994 when the captain came to pick his sister. Well, their love grew so strong and she married at ‘an early age’ of 18. She says early marriage is the best; she has all the time to achieve everything she wants to achieve now as all her kids are already in the secondary school. To her, pilots should be the best husbands because “they’ve seen it all.”

Captain Ekeinde lost his job earlier in October when Air Nigeria folded up. It was in the news briefly and fans wanted to know the truth. Omotola confirmed that her husband lost his job because the company folded, but he got another immediately.

So many Nollywood actresses have gone into music and most have not been really welcomed as fans believe their songs aren’t good enough, they should have stuck to acting. Some fans think Omotola didn’t do well in her debut album too, but others think she did a great job with songs like ‘Gba’, ‘Honeyboy’.

Omotola said she went into music because she’s passionate about it – and obviously not about the money for someone who disclosed she charges N5m or even more per movie.

The Redhot Records boss wants to release a sophomore album in 2013, but she’s scared. Well, she should be after the criticisms that rocked Tonto Dike’s debut singles.

The Estate Management graduate of Yaba College of Technology says Sound Sultan is her best friend in the industry, and true they’ve been friends for long; according to her, he introduced Learning Field Schools where her kids had their primary school education to her.

Of course you didn’t know this; Omotola used to listen to Fuji music and her favourite then was Pasuma. She likes Etighi best, she says…I’d like to watch her dance Etighi someday, it should be fun to watch, if you know what I mean. She also disclosed the bad habit she has; biting her nails.

So many questions from so many fans, that Omotola couldn’t answer them all. She promised another session as she tweeted from her bed (a fan asked where she was).

Omotola has this advice to youths; “Make hay while the sun shines and ignore Noise!”