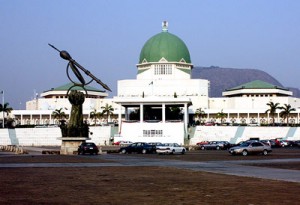 In a rather shameful revelation, the House of Representatives Committee on Works has raised an alarm over the bad state of Nigerian roads, despite over N1.414 trillion appropriated by the National Assembly for the road sector from 1999-2012.

This was revealed at the opening session of House Committee on Works’ 4-day public hearing on the urgent need to address the near total collapse of federal roads across the country.

Also, the Speaker of the House, Honourable Aminu Tambuwal, disclosed that Nigeria was losing N80 billion annually as a result of bad roads across the country. Honourable Tambuwal who was represented by the Minority Whip, Honourable Samson Osagie at the event said that statistics showed that Nigeria has the second highest road traffic accident fatalities among 193 countries in the world and called for holistic approach in addressing the road challenges.

In his address, the Chairman, House Committee on Works, Honourable Ogbuefi Ozomgbachi said, “the truth must be told, the condition of our roads is alarming and statistics attest to that. Between 1999 and 2012, the National Assembly had appropriated about N1.414 trillion for the road sector… And yet out of about 34,400km of Federal road network, only about 35 per cent is paved and substantial percentage of it in varying degree of distress and or pot-holes… In a country of about 160 million people with an approximate land area of 910,768 square kilometres in which over 90% of the passengers and freight ‘ movement are done by road due to almost non-functional water-ways and rail transportation, the situation assumes even a status of national emergency,” he said.

Nigerian Man, 2 Others Sentenced To 49 Years Imprisonment Over Fraud

A 29-year-old Nigerian man named, Ifeanyi Matthew Anthony and two other Cameroonians have been sentenced by a Southern Vietnam court to a total of...
Read more

Former minister of aviation, Femi Fani-Kayode has warned the Miyetti Allah group over its continued pronouncements on the establishment of the 'Amotekun' security outfit...
Read more
- Advertisement -