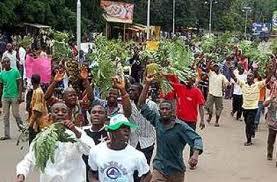 The ongoing strike in Plateau State might have suffered some setbacks as anti-riot policemen, on Monday, dispersed protesting workers in various locations in Jos with tear gas and volley of gunshots fired into the air. The strike had been embarked upon over the national minimum wage.

According to the Nigerian Tribune, the workers, who had gathered at the entrance of the state secretariat to prevent people from going in, were shocked by the invasion of the policemen at about 10.45 a.m. It was further learnt that, after this incident, the workers moved en masse to the state secretariat of the Nigeria Labour Congress (NLC) to re-strategize and review the onslaught by the security operatives.

An NLC source disclosed that before the workers could settle down at the secretariat, the anti-riot policemen again stormed the place and released several canisters of tear gas while shooting into the air.

Meanwhile, the state Police Public Relations Officer, DSP Abuh Emmanuel, said it was an attempt by the police to enforce an injunction by the National Industrial Court in Abuja restraining workers in the state from going on strike pending the hearing of the suit filed by the state government against the striking workers.