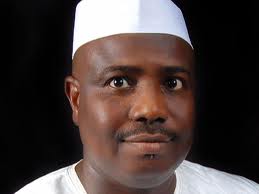 Honourable Aminu Tambuwal, the Speaker of the House of Representatives, has expressed his worries that about 50 per cent of Federal Government revenue is illegally spent outside the annual budget.

Tambuwal, who spoke at a meeting on revenue generation and remittances with revenue generating agencies and the House Committee on Finance in Abuja, noted that it was unlawful for any government agency to expend fund not appropriated by the National Assembly.

The lawmaker, who decried frequent revenue leakages from government coffers, said the unauthorised extra budgetary spending was responsible for the fiscal crisis into which the nation had been plunged. According to him, “if any arm of government finds any provision of the constitution inconvenient, it should propose amendments rather than continue to treat the laws and the constitution with contempt.