It is now a sin to wear miniskirts in Swaziland as police in Africa’s last absolute monarchy have banned women from wearing miniskirts and midriff-revealing tops saying they provoke rape, local media reported on Monday. 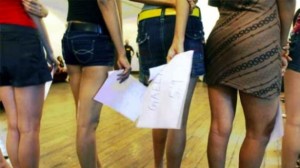 Offenders face a six-month jail term under the ban, which invokes a colonial criminal act dating back to 1889.

“The act of the defiler is made easy, because it would be easy to remove the half-cloth worn by the women,” police spokeswoman Wendy Hleta was quoted as saying in the Independent Online news.

Not only miniskirts are affected by the ban, but the ban also applies to low-rise jeans.

“They will be arrested,” she said.

Hleta said women wearing revealing clothing were responsible for assaults or r*pes committed against them.

“I have read from the social networks that men and even other women have a tendency of ‘undressing people with their eyes’. That becomes easier when the clothes are hugging or are more revealing,” Hleta said.

However, the ban does not apply to traditional costumes worn by young women during ceremonies like the annual Reed Dance, where the ruling King Mswati III chooses a wife.

The flamboyant king already has 13 wives.

During the ceremony, beaded traditional skirts worn by young bare-breasted virgins only cover the front, leaving the back exposed. Underwear is not allowed.

The law was enforced after a march by women and young girls last month calling for protection against a spate of r*pes in the impoverished kingdom, almost entirely surrounded by South Africa.

According to the media report, the march was blocked by police who has now found what they believe is a solution to the incidence of r*pe in Southern African country.