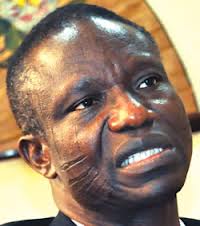 The Vice president of Pentecostal Fellowship of Nigeria (PFN) in charge of South West, Bishop Francis Wale Oke has charged President Goodluck Jonathan to be more courageous to take a decisive decision on the security challenges destroying the nation, appealing to political leaders of the North to exercise constraint and stop playing politics with the blood of Christians.

Bishop Oke was speaking at the corporate headquarters of Vanguard Media Ltd during the 12th edition of Vanguard Media Christian Fellowship end-of-year thanksgiving and prayer service with theme: The Change: From Glory to glory.

The cleric said the press especially, Vanguard Newspaper, has been in the vanguard of uplifting the nation through its investigative reporting especially from the military era till date.

However, on the issue of the current insecurity in the nation, he submitted that: “I want to appeal to our Northern leaders to stop playing politics with the blood of the southern people, to stop playing politics with the blood of Christians, to call their children to order. We know their children listen to them, the system of the North is that when they speak to their people they listen to them. Jonathan’s era will soon be over, don’t destroy innocent lives because of politics.