It may not seem much of a big deal lighting the Christmas tree in Nigeria, but it is a very important event in many countries, so much that American singer Rihanna was rumoured to have been paid $8 million (N1.2b) to light one in a London mall.

Whether we appreciate it that much or not, lighting the Christmas tree has become an important part of Christmas we can’t just overlook.

To get into the Christmas mood, the First Lady of Lagos State, Mrs. Abimbola Fashola at the weekend lit up a giant Christmas Tree at the Heritage Garden, Oshodi, Lagos.

According to her, the Christmas Tree was built by the Lagos State Government as part of effort to light up the city of Lagos this season, adding that the 27m by 8 diameter Tree “is the tallest in the whole of West Africa if not Africa.”

Commissioner for the Environment, Mr. Tunji Bello said the event which was meant to light up Lagos State at the Christmas season would be replicated in other parts of the state. 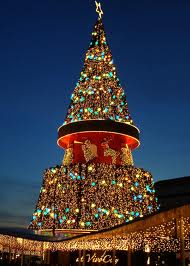