Some footballers don’t have the mental capacity to think of anything else apart from football. You can see the look in Wayne Rooney‘s eyes whilst he’s being interviewed or walking around Manchester in his casual hoodies that all that’s going on behind his pretty blue eyes is Football, Football, Football.

Other footballers, perhaps with a higher IQ than Rooney’s, have managed to venture past the world of football and moved on into other careers, much like how England cricket legend Freddie Flintoff has now begun the transition towards becoming a fully-fledged heavyweight boxer, license and all. It remains to be seen whether Flintoff will be a success, go down fighting, or simply get punched really hard in the face seconds into his first fight and realise it was all a terrible idea.

Here are some footballers who have had ulterior careers away from the football pitch, some successful, some unsuccessful, but many of them hilarious.

Former Tottenham striker Roman Pavlyuchenko also has a flourishing career in politics. In Russia he is a city council representative of Stavropol, and is a member of Vladimir Putin’s “United Russia” party.

Upon winning the seat in 2008, the Russian international told reporters: “Because of my profession it won’t be easy for me to take part directly in the workings of the city council – but I am ready to help with advice and with a concrete contribution to the development possibilities for exercise and sport.”

He probably won’t be leading a coup d’etat to take control of the Kremlin any time soon.

The powerful target man that is Geoff Horsfield, who played for the likes of Fulham, Birmingham and West Brom, didn’t have the easiest of careers, especially in the early years.

After failing to make it through the trails for hometown club Barnsley, the forward took up a college course in Bricklaying. Horsfield continued to work as a brickie while playing non-league football.

Rather heroically, he netted 30 in 40 during his second spell at Halifax town, clinching them promotion into the football league, and thus allowing the club to offer Horsfield a full-time contract so he could finally lay his trowel to rest and stop doing his back in whilst mixing cement.

Terry Venables is well known for being a competent football manager, but off the pitch El Tel had a number of business interests. As well as becoming Managing Director of QPR and Chairman at Tottenham, he also owned a nightclub.

Unfortunately for the former England manager, he was banned from acting as a company director for seven years in 1998 after a case made by the Department of Trade and Industry proved instances of bribery, deception, manipulation of accounts and taking money owed to creditors.

Venables has also entered into the world of writing, and is the co-creator of ITV series “Hazell”, working with Gordon Williams to produce four novels based on the same character. In 1990, he also came up with the predecessor to football management computer games with a board game version of the same concept.

Robbie Fowler is one of the richest footballers in the world and was named as one of the 1,000 wealthiest Britons in 2005. This was not due to of any particularly large wage offers made to him by Liverpool, Manchester City or Leeds during his playing days, but because he is also a well-known property mogul.

Fowler owns over 80 properties, in addition to other business interests, including several racehorses co-owned with former team-mate Steve McManaman and has a net worth valued at £28million.

Socrates is known as one of Brazil’s most iconic players, but he also managed to become a Doctor of Medicine, studying for the degree while playing football.

Furthermore, the former Brazil international who unfortunately passed away this time last year, was also heavily involved in politics. He started the Corinthians Democracy movement and influenced several of his team-mates to help him protest against the military government that controlled Brazil at the time. He also contributed to several newspapers and magazines, writing articles on Sports as well as Politics and Economics.

The Premier League’s second highest all-time goalscorer Andrew Cole once tried to replace hitting the back of the net for hits in the chart when he released his first and only single “Outstanding” in 1999, back when he was just Andy.

Of course, as you can imagine, it was not outstanding at all and failed to make it into the UK Top 40.

Despite popular belief, the song was not actually written by Cole, and was a cover of The Gap Band’s 1982 hit. The Gap Band reached number 1 in the US RnB charts, which only highlights how awful the former Manchester United striker’s version truly was.

Upon his transfer to Nottingham Forest in 2008, a small group of Forest fans attempted to get Cole’s flopped single re-released, not that the striker approved.

The former England man told the Nottingham Evening Post he was not interested in restarting his music career: “I was a great deal younger when I made Outstanding and I can categorically say it will represent my one and only attempt to make an impression in the world of music.”

Have you ever wondered why Morten Gamst Pedersen always seems to have very snazzy, boybandish hair? Well it’s because the Blackburn Rovers man is actually in a boy band, known as “The Players”.

The Norwegian Pop outfit have only recorded one song, a charity single entitled This is for Real, as part of the Red Cross campaign Soccer against Crime.

There are five members of “The Players”, who are all footballers. The other four are Freddy Dos Santos, Raymond Kvisvik, Kristopher Haestad and Oyvind Svenning.

Pedersen is not the only footballer-come-singer set to appear in this list, but he is arguably the most successful. The single swept across Scandinavia, giving the midfielder a career to fall back on if it all goes wrong for him in the Championship. 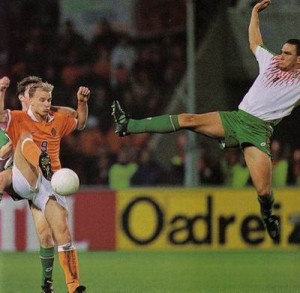 After retiring from the game, Vinnie got a job in acting, essentially being Vinnie Jones. The former Wimbledon, Chelsea and Leeds midfielder has featured in 66 films and TV shows according to IMDB, including a debut in Lock Stock and Two Smoking Barrels, and a leading role in Mean Machine.

Jones has also appeared in WWE, back when it was WWF in 1998 as a Special Enforcer, taking on the Big Boss Man and subsequentially issuing him a Red Card. In 2007, Jones returned to the ring to tell Wrestling fans he had “kicked Stone Cold’s Arse” on the set of The Condemned – a film in which both hard men featured.

Aside from acting and wrestling (although they could be counted as the same thing), the former Wales international has also released a Blues and Soul album in 2002 with covers of classics such as “Bad Bad Leroy Brown”.
Something tells me there is a reason Vinnie hasn’t released another album since.

Unlike many other footballers who have gone on to release autobiographies, for example Wayne Rooney’s five year book deal in which his second publication “Wayne Rooney – My decade in the Premier League” sold just 6,000 copies in the first six weeks prior to its release, Theo Walcott has gone for a far subtler approach.

The Arsenal winger has released a series of children’s books based around the semi-fictional “T.J.”, a young school-boy taking the playground and school team by storm with his goal-scoring abilities.

Some of the issues tackled in the books include T.J.’s best friend becoming overweight and being dropped by the school team’s coach due to a lack of fitness, former star player Tulsi considering quitting the school team after being left behind as the rest of the players progress as footballers, and a new teacher taking over as coach and imposing terrible tactics weeks before the semi-final in the youth cup.

The AFC Wimbledon player has moonlighted as a model in the past, and was used as Rio Ferdinand’s body double while playing for Conference North side Histon.

Mitchel-King gave up his second career after being offered a professional contract by Crewe Alexandra. The defender and midfielder initially worked for Armani after being scouted walking down Oxford street.

“I thought I was going to be a millionaire in my first year, but it didn’t work out like that,” Mitchel-King told reporters upon signing for Crewe in 2009.

“I am Rio Ferdinand’s official body double, I think my rates are a bit cheaper than his,” he added.

Tottenham forward Clint Dempsey is another footballer to dip into the world of music. Recording under the name Deuce, Dempsey is a part-time rapper, and teams up with fellow Texan hip-hoppers XO and Big Hawk to form the “Screwed Up Click”.

The rap group featured on the track “Don’t Tread”, used by Nike in an american advertising campaign for the 2006 World Cup.

There’s every chance the USA international could be returning to the mic as his Tottenham career has suffered a somewhat false start.

David Ginola’s post-football career is largely unsurprising. What else would a suave, wealthy and incredibly French Frenchman do apart from becoming a Winemaker.

The former Newcastle and Tottenham midfielder even won a silver medal at the 2008 International Wine Challenge for a Rose produced at his vineyard in Provence.

Better known for his acting than his footballing, Anthony Lapaglia is a major US Television actor and has starred in Without a Trace, Frasier, and Murder One, as well as doing voice work for Happy Feet and Happy Feet Two.

But what is less known about the Aussie actor is he was once a goalkeeper for Adelaide City and West Adelaide in the 1980s.

Lapaglia is now part-owner of Sydney FC, and is Club President of Hollywood United, an amateur team made of former footballers living in Hollywood including Vinnie Jones and Frank Leboeuf, accompanied by lesser footballing talents Steve Jones from the Sex Pistols, actor Jason Statham and film director Danny Cannon.

Eric Cantona is a Manchester United and Premier League legend, but following his early retirement from football in 1997, Cantona threw himself into the film industry.

Cantona has now appeared in 21 movies, although initially only appearing as a footballer in films such as “Eleven men against Eleven”, which he was not credited for.

Aside from film, the former United forward also has an interest in politics and tried to stage a social revolution by telling customers from high-street banks to withdraw their funds in protest to the Global banking crisis in 2010.

Gica Popescu is a former Barcelona captain, and played for Tottenham, PSV and Galatasaray. But as well as being a top-level footballer, the defender was also a part time spy in his native Romania.

In his early career, Popescu was approached by the Securitate and was expected to supply the Romanian secret police with information based on Universitatea Craiova’s runs in the UEFA cup, and also grass up any team-mates who could become defectors.

What remains to be discovered is whether Popescu’s loan to Steaua Bucuresti, the Romanian Army’s football team, in 1988, was a direct attempt by the Securitate to ignite an implosion of the club and the armed forces as part of the ongoing struggle for power on the Romanian political scene.