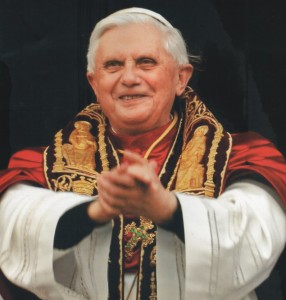 The Pope has used his Christmas address to the Vatican bureaucracy to disclose the papacy’s stand on gay marriage saying that gay people entering into marriage is against nature in such a fundamental way that it could spell the end of humankind.

“There is no denying the crisis that threatens it [the family] to its foundations — especially in the Western world,” the Pope is quoted as saying. “When such commitment is repudiated, the key figures of human existence likewise vanish: father, mother, child — essential elements of the experience of being human are lost.”

Steve Williams wrote onCare2.com; “Utter nonsense of course, as some gay people marrying does not by extension delete the mother, the father or the child, and to infer that it does is beyond childish, it’s belittling to all intelligent conversation. It also infers what the Pope has previously offered: that people in same-sex relationships are somehow not human.
Indeed, the Pope seems to have jettisoned all measured response on this issue, going on to say that people are somehow manipulating their identities against nature and destroying the “essence of the human creature.””

The Pope was also quoted by the Independent as saying; “People dispute the idea that they have a nature, given to them by their bodily identity, which serves as a defining element of the human being,” he said.

“They deny their nature and decide that it is not something previously given to them, but that they make it for themselves. The manipulation of nature, which we deplore today where our environment is concerned, now becomes man’s fundamental choice where he himself is concerned.”

Earlier in the week, the Vatican released a full front-page editorial that appears to claim same-sex couples exist in some sort of different reality because they cannot conceive children together, and that marriage equality is questing after an “unachievable utopia.”

Although nations like Portugal and Argentina, and more recently the United States and Britain, have moved, with increasing support, to offer marriage equality, the Vatican’s stand on the issue is not influenced.

“Man and woman as created realities, as the nature of the human being, no longer exist. Man calls his own nature into question. From now on he is merely spirit and will. […] When freedom to be creative becomes the freedom to create oneself, then necessarily the Maker himself is denied and ultimately man too is stripped of his dignity as a creature of God,” the Pope said.

The Pope obviously isn’t hiding his stand on this issue as he earlier this month, chose to bless Ugandan parliamentary speaker Rebecca Kadaga, who is now the chief proponent of Uganda’s ‘Kill the Gays’ bill. The bill which was supposed to be passed this week missed its Christmas deadline but would most likely will be taken up in the new year.