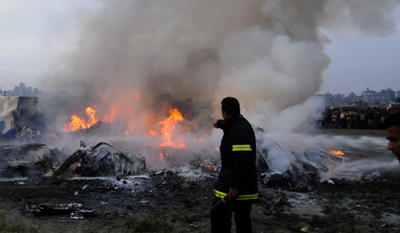 At least 11 people have been confirmed dead after a South African military plane crashed in the country’s mountainous east. The Dakota air force plane, which crashed late Wednesday, was not carrying members of Nelson Mandela’s medical team, as earlier unconfirmed reports suggested.

According to the defence department spokesman, Siphiwe Dlamini, who spoke with local news agency SAPA, “On board the aircraft was a crew of six and five passengers, and it was confirmed that there are no survivors… The SANDF (South African National Defence Force) has commenced with the process of informing the next-of-kin of the deceased members. The names of the deceased will be released when all the next-of-kin have been informed.”

The plane was reported to have left Pretoria’s Waterkloof Air Force Base and was scheduled to land at 10:00 am (0800 GMT) in Mthatha, a small airport in the Eastern Cape that is the closest to Mandela’s rural homestead of Qunu, where he has lived since retiring from public life.

Although rescue helicopters were dispatched to the mountainous region after the plane was reported missing, they had to be called back because of bad weather; ground rescue teams were also sent to the area.