Tragedy recently struck the household of former fringe defender of Nigeria’s Super Eagles, Obinna Nnodim, who passed on in Owerri. 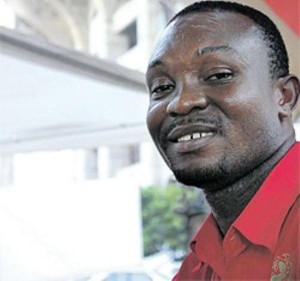 Jerry Uche, an ex-teammate to the former Julius Berger football club of Lagos stopper disclosed to newsmen that Nnodim gave up the ghost in a mysterious circumstance shortly after his wedding ceremony with his fiancée.

After an injury he sustained on the field, he suffered a broken knee which necessitated his travel to Thailand where he underwent knee surgery. However, that didn’t stop him from playing actively.

“Obinna was looking hale and hearty when I saw him few days before his death. He just returned from Thailand for his wedding.

We all wined and dined together only to receive the sad news few days ago that he was dead. This is a big shock to me and the rest of us.

I just want to believe that there is more to it than meets the eyes. His mother has been ill for so many years and to make matter worse he is the bread winner of the family’’,Uche lamented.

Until his death, Nnodim , 31, featured for Arugo FC of Owerri, Julius Berger, Dolphins and Sharks Football Club of Port Harcourt.

The high point of his career was when he helped Julius Berger to reach the final of the African Winners Cup now known as the Confederation Cup in 2003.

Meanwhile, Nnodim’s burial which had been initially slated for Thursday has been suspended indefinitely by the family until the cause of death is ascertained.