Two men and a woman have been arrested after a severed pig’s head was left at the doors of a Muslim place of worship. 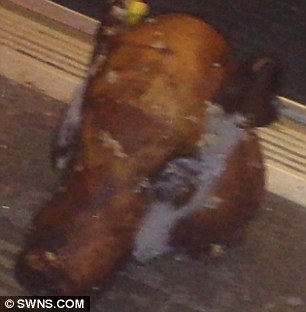 Police were called on Boxing Day morning after the sick gesture was discovered at the entrance to the community centre in the Thurnby Lodge area of Leicester.

The centre was being used by a local Muslim group – who found the offensive object when they came to unlock the automatic front door at 7.30am.

Shocked Muslim locals today expressed their disgust at the ‘attack on their culture’ as Islamic law strictly forbids the eating of pork and many consider pigs to be unclean animals.

Moulana Mohammed Lockhat, 40, the Imam for the As Salaam group, said: ‘We arrived to open up the centre for prayers and found the pig’s head – we were deeply shocked and saddened.

‘It had probably come from a butchers and is clearly an act of deep, religious discrimination against us. It is an attack on our culture.

‘It is a very worrying turn of events and we are clearly not welcome, which upsets us.

‘We still had our prayers on Wednesday morning and putting a pig’s head outside isn’t going to change things, except maybe make us more determined than ever to carry on.’

The centre has recently become the focus of a row involving the British National Party (BNP) and the As Salaam group who want to pray at a neighbouring disused Scout hut, which is owned by Leicester City Council.

In recent months, Muslims going to and from prayers at the venue have had to walk past angry protesters who don’t want the group to use the property.

Around 200 people, including members of the BNP attended a demonstration in August to oppose the group’s plans to have sole use of the hut.

Mr Lockhat added: ‘We are sad that we cannot work together as a community.

‘We have been part of this community for five years and we do not understand why we cannot be accepted. We would love to, we’ve been trying to.

‘The protests are supposed to be directed at the council, but on many occasions they haven’t been. It has been quite intimidating for many of our members who fear for their own safety.

‘We have had pictures of our children and homes taken and been followed home and threatened with violence.

‘It was going to boil over at some point and people are fearing for their physical safety after this deeply distressing incident.’

Leicestershire Police yesterday confirmed they had arrested a 40-year-old woman and two men, aged 37 and 46, in connection with the racist incident.

Superintendent Mark Newcombe, from Leicestershire Police, said: ‘The only people using the community centre on Wednesday were from a local Muslim group and it’s easy to draw the conclusion that the pig’s head was meant for them, and is the reason we believe this to be religiously motivated.

‘We have no tolerance for discrimination in Leicester, be that racially or religiously motivated, and we want members of the public to help us do all we can to find those responsible and bring them to justice.’