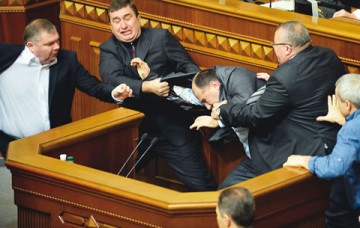 For those who think it is only in Nigeria that lawmakers throw punches, recent developments in the world have proved that to be untrue. The video of a Jordanian Member of Parliament (MP) who pulled a gun at his opponent during a debate on live TV recently went viral on the internet.

However, in another similar development, Ukrainian parliament on Thursday voted to reinstate its prime minister as dozens of opposition and pro-government lawmakers brawled for a second day in the Ukrainian chamber which has become notorious for its fisticuffs.

The Deputies in suits and shirtsleeves climbed on tables, shouted and grappled with opponents in an angry protest against lawmakers pressing electronic buttons to vote for absentee colleagues. While lawmakers are legally obliged to vote in person, many of them run around pressing buttons for absent colleagues.

Opposition politicians rose to their feet and rushed to blockade the speaker’s tribune, while being pushed back by pro-government lawmakers. Amid angry shouts and calls for calm, some clambered on desks from where they dealt blows and jumped down on opponents. At least one opposition lawmaker had a bruised face after being thrown to the floor and receiving punches and kicks from ruling party lawmakers, the Interfax news agency reported.