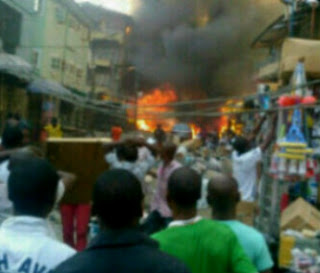 A fire in a crowded Jankara area of Lagos believed to be storing fireworks on Wednesday spread to at least nine buildings and 30 people had been treated for injuries, a rescue worker said.

“We have treated up to 30 people so far,” Red Cross worker,  Nicolas Adesile told AFP at the scene, adding that there had not been any reports of deaths.

According to an eye witness, the massive fire gutted eight houses and injured forty people according to Ibrahim Farinloye, the National Emergency Management Agency spokesperson in Lagos.

Within minutes of the explosion, the fire spread to a nearby building, sending hundreds of residents, traders and shoppers fleeing in the usually boisterous market area.

As a result of the explosion, it was learnt that the building which had the shop under it and two others adjoining collapsed.

Residents of the three buildings, who were still celebrating the Christmas festivity mood but were still on beds to witness the boxing day, were affected during the explosions.

A score of other residents were said to be currently trapped in the debris of the collapsed three buildings.

As at press-time, officials of the Lagos State Emergency Management Agency (LASEMA), fire service, police, Nigerian Security Civil and Defence Corps (NSCDC) and others had visited the scene for rescue operations.

The exact casualty figure is yet unknown, although about 30 injured persons have been rushed to the hospital with serious burns.