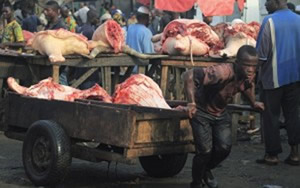 This was made known in a release by Assistant Director and Chief Press Secretary to the Minister of FCT, Senator Bala Mohammed. The administration explained that the new meat haulage policy was aimed at safeguarding the residents and visitors to the FCT from cholera outbreak and food contamination, which had been observed in some neighbouring states of the federation.

The new policy became effective on November 6, 2012, and required the use of dedicated meat vans and special purpose-made tricycles with meat haulage compartment for the movement of meat in the federal capital city, area councils and satellite towns.

These tricycle meat vans are meant to convey meat to distances not more than 3 kilometres from the slaughter points while the four-wheel meat vans are to serve longer distances. The FCTA also disclosed that the implementation of the new policy followed meticulous sensitisation meetings with the Abattoir Drivers Cooperative Societies (ADCS) and other stakeholders on the benefits of the new policy.