The West African Examinations Council, yesterday in Yaba, Lagos, said that about 62.03 percent of students who wrote the November/December 2012 West Africa Seniour School Certificate Examination failed the test as only 37.97 percent or 150,615 obtained five credits including English Language and Mathematics. 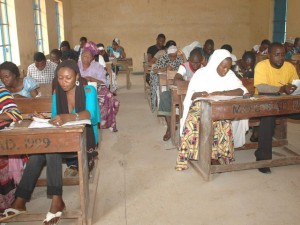 Blind students performed better than those without sight problems as 46.93 percent of 49 students that registered for the examination obtained five credits including English Language. Blind candidates do not sit for Mathematics and Science practicals in WASSCE examinations.

According to the Head, National Office of the Council, Mr Charles Eguridu, out of 396,614 candidates who sat for the examination, about 47,289 candidates’ result, representing 11.04 percent were being withheld in connection with various cases of examination malpractices.

Eguridu disclosed that cases of examination malpractices were being investigated, pointing out that the reports of the investigation would will be presented to the Nigeria Examination Committee, NEC, for consideration and final decision would be communicated to the affected candidates through WAEC zonal and branch offices across the country.

His words, “A total number of 49 blind candidates registered for the examination. Out of this figure, 23 candidates, representing 46.93 per cent obtained credits in five subjects including English Language.

Candidates are expected to visit the council’s website for their results, even as Eguridu lamented the dearth of qualified teachers, inadequate and dilapidated classrooms and appealed to the federal, state government as well as other school proprietors to address these challenges. He also urged the Ministry of Education to ensure that only schools with the necessary facilities to function as schools will be duly registered.