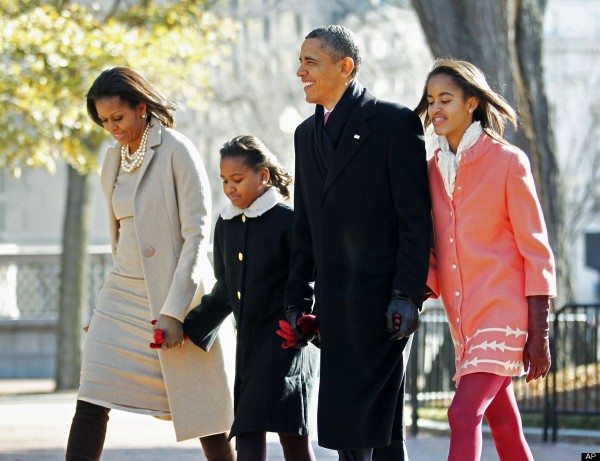 It was only just before the election that Barack Obama first heard “Gangnam Style.”

At the time, he noted tentatively: “I think I can do that move. But I’m not sure that the inauguration ball is the appropriate time to break that out.”

Two months later, he’s still reluctant to do the dance in public — but he’s apparently more than willing to do it at home.

“They’re cooler than I am,” the president says of his daughters in a new interview with People magazine. “There are things I like that they think are cheesy, like ‘Gangnam Style.'” He adds that he “absolutely” does the now-internationally-famous “gallop” to embarrass his kids.

Obama has already expressed his appreciation of the mega-viral hit in person, according to an interview with Psy in The Hollywood Reporter. The South Korean singer explained: “He told me he’s good at ‘Gangnam Style’ but that the ladies at his house are embarrassed when he’s dancing so he’s not doing it.”

In the People interview, the president and Mrs. Obama also discussed their family life on a more serious level.


Mrs. Obama said the girls have plenty of time to decide what they want to do when they grow up — Malia’s “a freshman, so she also knows she has years in college to explore her interest,” and Sasha “doesn’t even try and lay it out yet.”

Meanwhile, the president waxed sentimental about how quickly the time goes.

“There’s something about your daughters that just breaks your heart. … The finite amount of time you have with your children, and the joy they bring on a minute-to-minute, day-by-day basis — the idea that that’s not there all the time is something that can hit me hard sometimes.”