Members of Faith Builders Ministry, a Pentecostal church located in Calabar Municipal Council of Cross River State, have been thrown into mourning following the death of their pastor and founder, Rev. John Ene-Obong, who was killed last Monday by irate youths over a land dispute in Ikot Ene-Obong community. 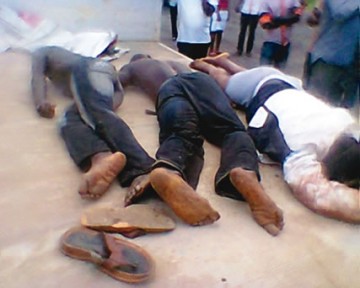 Ene-Obong, who reportedly returned to Nigeria from Canada barely a week before his death, was killed alongside two others whose names were given as Effiong Koko-Ette and Victor Ene-Boco.

PUNCH Metro gathered that the disputed land belongs to the family of the slain pastor.

It was further learnt that the pastor and two others might have been killed to avenge killing of one Eton, who was killed on the same farmland.

Eton, our correspondent learnt, was accused of maiming another man identified simply as Effiong.

Effiong, who was said to be a victim of the protracted land dispute, has been amputated on one of his legs following injury sustained when he was shot.

On the latest killings, a source told our correspondent that the pastor went to inspect the land in company with the two other victims when they were ambushed and killed.

Residents of Ikot Ene-Obong community and its environs are now living in fear following the war of attrition the land dispute had caused among members of late Chief Ene-Obong’s family.

It was learnt that the land dispute had polarised the family and factions within Ene-Obong’s family now resorted to use of thugs to intimidate one another.

He said it was painful and unfortunate the way things had turned out, adding that the family would soon come out with burial plans.

When contacted, the state Police Public Relations Officer, Mr. John Umoh, said six persons had been arrested in connection with the killings.

Umoh, who stated that investigation was ongoing on the matter, however, added that the principal suspect was still at large.

He said, “The state Criminal Investigation Department has taken over the matter. Six persons have so far been arrested in connection with the killings.

“There is one principal suspect that is still at large. However, those arrested are still in our custody and we will not release them until investigations have been concluded.”