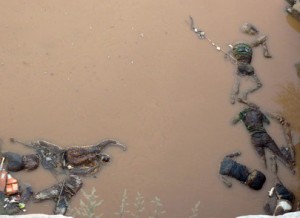 Eighteen decomposed bodies evacuated from Ezu River on the border town of Amansea, between Enugu and Anambra states, will today be subjected to autopsy to be jointly carried out by Anambra and Enugu State governments and their police commands.

Addressing Anambra Divisional Police Officers, DPOs, and other senior police officers in the state yesterday, State police commissioner, Mr. Bala Nassarawa, gave the figure as he confirmed that all the dead bodies were males, adding that three bodies had been selected for the autopsy because the other 15 had become too bad.

“We have also discovered that there were no gun injuries or machete cuts on their bodies as being speculated and the dead bodies were not up to 30 or 50 as rumoured,” Nassarawa said.

According to him, the Commissioner of Police in charge of medicals, the state Commissioner for Health and pathologists from the two states would be involved in carrying out the autopsy.

Nassarawa assured the public that the police would provide additional information on the matter at the rights time as investigations were still continuing on the matter.