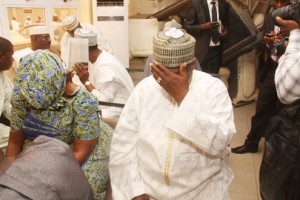 Various reactions continue to trail the decision of an Abuja High Court to sentence a former head of the Police Pension Board (PPB), Yakubu Yusufu, to a two-year jail term after he confessed to embezzling N23.3 billion belonging to the PPB. Also, the court gave him the option of paying N750, 000 and walking away a free man. But it ordered that Yusufu forfeits property valued at N325 million.

Yusufu, had pleaded guilty to counts 18, 19 and 20 wherein he was alleged to have connived with Mr. Essai Dangabar, Atiku Abubakar Kigo, Ahmed Inuwa Wada, Mrs. Veronica Ulonma, Sani Habila Zira, Mrs. Uzoma Cyril Attang and Mr. Christian Madubuike, to convert the sums of N24.2 billion, N1.3 billion and N1.7 billion respectively, belonging to the Pension Office to their own use, an offence punishable under Section 309 of the Penal Code Act, Cap 532, Laws of the Federal Capital Territory, Abuja, Nigeria 2007.

While delivering his judgment, Justice Abubakar Talba held that Section 309 of the Penal Code under which the accused persons were charged provides for a two-year imprisonment with an option of fine or both if found guilty. Accordingly, he had no trouble reaching the decision to give a two-year sentence for each count expected to run concurrently or an option of N250, 000 per count.

Following are the reactions of some prominent Nigerians to the verdict:

For Professor Itse Sagay, a professor of law and Senior Advocate of Nigeria (SAN), even though he was not a crime lawyer, he said he was aware that the law for such offences provides for at least a 14-year imprisonment: “This particular stealing is aggravated not just because of the amount of money involved but because of the people affected. Those are the people who have served this country in their prime; spent their years serving this country and are now dying in penury. To me, he deserves a capital punishment.”

In his own reaction, the chairman of the Ikeja branch of the Nigerian Bar Association (NBA), Onyekachi Ubani, said that something drastic had to be done to amend the penal code that provided for such penalty: “It encourages impunity. If it is true that the provision of the law says two years, it does not make for the orderliness of the society. Punishments are supposed to serve as deterrent, but this type will encourage more crime. What is two years?” he queried, adding that the National Assembly should as a matter of urgency amend the penal code to provide for a stricter punishment.

However, in a rather interesting reaction to the development, a former National President of the NBA, Dr. Olisa Agbakoba (SAN), had a different opinion. He said that the fact that there was a conviction was enough to cheer about. His words: “It is encouraging. This news about the conviction is good and everybody should be happy. Let us first get conviction at all. This is a country where it is difficult to convict corrupt cases. All we hear before is arrest, charge, and bail with nothing to show for it… I am happy that there is a conviction while not losing sight of the fact that the sentencing was inappropriate. We can rather continue to encourage the judges to continue in that direction but to make it more stringent so that it will send a strong signal”, he added.