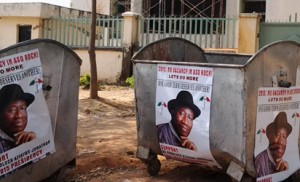 With about two years to the next elections, giant campaign posters, announcing President Goodluck Jonathan’s readiness to contest the 2015 presidential election, greeted Nigerians in Abuja, the nation’s capital, as they woke up to savour the dawn of the New Year.

The posters, which were strategically posted in the high brow areas of the Federal Capital Territory, did not however indicate the source or the sponsor of the advertisement.

This launch of the campaign materials contradicts the President’s claim that he has not yet decided on the 2015 poll but concentrating effort on transforming Nigeria in line with his manifesto to give the people a ‘fresh air’.

It is yet unclear why the sponsors of the message decided to put it out on the first day of the New Year but a source familiar with the message pointed out that it was to send a strong message to the opposition that Jonathan was serious about contesting in 2015 and to test the reactions of the Nigerians.