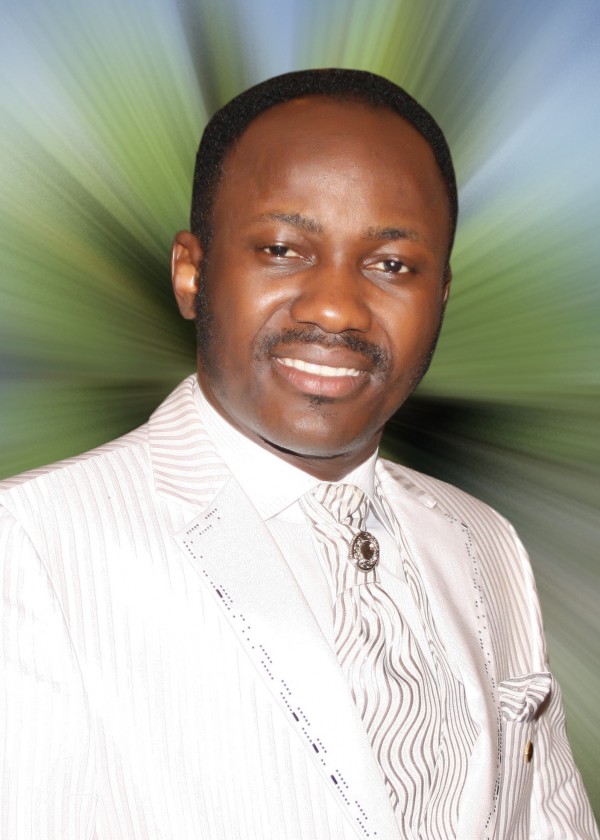 Do you believe in prophecies? Or do you just believe some of the prophecies been churned out are not rocket science and are predictable by just anybody with some level of exposure and foresight? Nonetheless, it is not hard predicting that there will be grave consequences if president Goodluck Jonathan decides to recontest in 2015 but what might not be so easy is predicting the possibility that only eight governors will finish their tenure unless urgent prayers are made to save the situation.

Those are the views of Apostle Johnson Suleman, the General Overseer of Omega Fire Ministry, one of the leading new generation churches in the country today situated on the Auchi-Abuja road in Auchi, Edo state.

Pastor Suleman who had in the past predicted the death of President Yar’Adua, spoke on his life and his views on the purchase of private jets by top pastors in the country.

His take on pastors and private jets: “The truth is that some of these Pastors in fairness have really done a lot for the less privileged. We can never do enough but you can do a lot because there is still one less privileged person out there that needs to be reached. It is not possible for the soap factory to make sure that every body gets neat every day, but what they can do is to affect the ones they can affect and enlighten the ones they can enlighten. Most Pastors also have really taken it up as a challenge to touch the lives of the less privileged.

“But some of them have not. When a Pastor has spent many years in the Ministry and now owns an air craft, I have no problem with all of that. What I have a problem with is this pursuit to prove to the world that you have arrived. You are going to pay the pilot, the crew members, maintain the aircraft, it cost a lot of money. That is my worry with people in that category,” pastor Suleman said.

On 2015 and the possibility of a Jonathan candidacy, he has this to say, “One major thing that I will say now is that people should be careful not to be crazy about power. One good thing that I will advise President Jonathan is that he should not contest for the 2015 presidential election. And if prayers are not made, if we don’t pray, I see only eight governors completing their tenure. We should pray because with prayers, a lot of things can be averted but if we don’t pray, we will see eight governors only completing their tenure. What God wants to focus on this year is to reward politicians with their sins.”

Pastor Suleman also predicted a boom in the agricultural sector just as he said he sees “natural disasters coming up.” Recalling the mystery surrounding the presidency in the years past, which he says should not be ignored, pastor Suleman said, “I saw an African President being laid to rest and I saw Nigerian flag flying half mast. We need to pray for President Jonathan, if he goes ahead to contest there will be trouble. Abacha’s wife left the villa without Abacha, Yar’Adua’s wife left the villa without the husband, if Jonathan goes to contest, something very grave may happen” he said.

“Those who are pushing him now, they want to destroy him. I am not saying this out of any personal animosity. I am saying this now because it can be averted.

“He should seek counsel. I love him but destiny has to be taken very sacrosanct. So I believe that if he asks for counsel, people can help him not to run for the Presidency in 2015” he concluded.