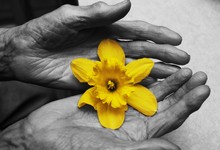 This man, in the face of this was not fulfilled. This was because he was just a column writer in a local newspaper, and through that, he earned not more than #25,000 in a month.

Consequently, he could only afford a small public school for his children, much to the chagrin of his dear wife.

Slowly but surely, this woman gradually lost all the respect that he had for her husband. Especially due to the fact that she was earning a bit higher than her dear husband due to promotions.

Damn… She was young and beautiful, and this made men to flock around her always trying to get a taste of God’s beautiful creature but she had remained faithful for the love of her husband. But as things stands now, she was moving to the brink of compromise.

She was to see the full dividend of her compromise when a certain chief gave her the sum of #450,000 just for her Christmas shopping. So this is what I have been missing all these while she reasoned. This made her to loosen herself to every big man in town whom she believes would foot better bills for her. Through out the ember months, her class changed even as she unilaterally changed her children’s school to one of the best in the state.

Mr Jacobs her husband, who was into column writing has proved himself to be an enemy to the state government in power. So many times, the governor had sent thugs to man-handle him and even leave him in bruises. His criticism of the brutal governor has not gone down well with his wife either, who had in the past begged her husband to stop the column-writing in order to save his life for the sake of her and the children. Yet, Mr Jacobs held out. The governor had tried in every possible way to stop this man but he seemed not to be afraid of death. He even went as far as rejecting bribes from the government house. His wife almost went mad when she heard that her husband rejected a #500,000 bribe from the governor when they were struggling to eat.
Consequently, her disgust for Mr Jacobs grew.

Mr Jacobs had now started hearing “kepu kepu” about his wife’s escapades in town with high chief and this further led to his frustration but yet, he kept on writing his column.

The gossips about his wife got so much that he had to confront her about it only to be washed with insults by his wife about how “useless” and “irresponsible” he is.
Florence, his wife was a personified venom on that day as she further claimed that Mr Jacobs has not been man enough for her and his children. And since he could not shoulder his responsibilities, other men had to do it for him.
On hearing this, Mr Jacobs who had not beaten his wife ever before, released a hot, dirty slap on Florence’s cheek
Poooooow !!!

That slap… That brutal slap… That ruthless slap, made his wife to tell him that she regrets the day she married him. It was indeed the last straw that broke the camel’s back as regards their marital well-being. Florence could not tolerate that assault, not after catering for the family with her hard earned cash when her husband was not able to.

That Christmas, Mr Jacobs had not planned to move his family home for Christmas because of his cash strapped pocket. But his enraged wife had another plan, especially when she has the big men blowing her pocket.

Just on the morning of 24th Dec, she moved her children to her own home town to spend the Christmas there. Mr Jacobs was to come back from the office after writing an image tarnishing piece against the governor’s wife who had turned her office into a spending castle, only to meet a note on the table from his wife about their whereabouts. All these because i don’t have money, he murmured to himself in anguish . . . . . . . . . And cried profusely like a baby.
Oh poor Jacobs !!

He stayed all alone through out the season, little did he know what was coming.

In the governor’s new year broadcast on the 1st of January, His Excellency shocked the state. Mr Jacobs Anasor is hereby appointed as the new Director General of the State Broadcasting service. His party advisers had advised him to appoint the ruthless writer as a way to seduce him to their side. This was coming after the former board was dissolved 2 weeks ago. The governor feared that Mr Jacobs would reject the offer if he was informed before hand about it, hence he chose to broadcast it first.

Mrs Florence was not aware of this broadcast. But its reality dawned on her when her colleagues, friends and neighbours started raining calls to her phone like never before, congratulating her. This was a shocker. She just could not believe it. Infact, she was confused. Where does she go from here ?

Mr Jacobs was to have a government delegation sent to his house to urge him to accept the appointment which entailed him starting work the next day, which is 2nd of January.

After being handed over at the office, his new secretary came in with a crying woman, HIS WIFE ! He bowed down while struggling to hold back his tears, He Cried. Share to Inspire others.