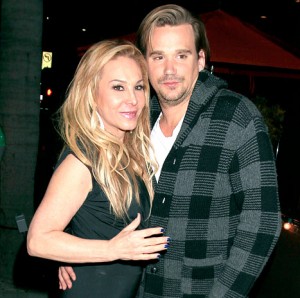 Adrienne says she met 32-year-old Sean very recently through a mutual friend. Sean had wanted to pitch her a business idea and the two just hit it off. Sean and Adrienne were spotted leaving a Bev Hills restaurant together at the weekend, and Adrienne says it was just one of several recent dates. But she was quick to add that the two are keeping things casual for now.

51-year-old Adrienne isn’t bothered by the age difference either, as she says, “It’s about how good of a person you are … [Sean] is a very funny guy. He’s very giving; he mentors at the mission, works with at-risk children, and gives his time and money to get children off the streets.”