Victor Moses is again the man tasked with converting the spot-kick. It takes plenty of composure to keep your head after such a long enforced break – but he shows it in abundance. 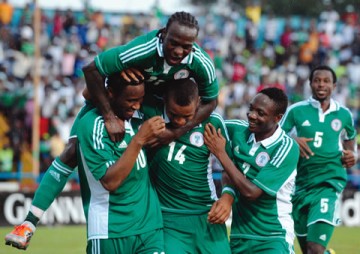 The Eagles finally booked their quarter final place with two goals in the last 20 minutes of the game against the Walya Antelopes of Ethiopia on Tuesday in Rustenburg. Victor Moses was the hero of the day as he made and converted the two penalties that won the game.

With Nigeria needing a win to progress from Group C, it looked like a scrappy match would finish goalless as Ethiopia frustrated the Super Eagles while threatening to nick it themselves. But Moses won and converted two spot kicks, one of which came from a reckless challenge from goalkeeper Sisay Bancha, who was dismissed for the second time at these finals, and Nigeria sealed their progress as defending champions Zambia crashed out.

A strange first half saw both sides disjointed by sweeping changes, Ethiopia dropping eight players from the 4-0 defeat to Burkina Faso, and Nigeria introducing unheralded midfielder Sunday MBa while leaving the likes of Joseph Yobo, Ahmed Musa, Ideye Brown and Nusa Igiebor on the bench. With both sides needing victory, the Super Eagles came out of the blocks as quickly as expected, with Moses causing problems and Bancha in the Ethiopia goal made to work by the recently-capped Chelsea forward and his club team-mate John Obi Mikel. Ethiopia had adopted a form of long ball strategy, with Saladin Said the only real outlet in open play. However, they started to win more set pieces, from which they threatened Nigeria as Said headed over from one as another bounces just wide.

Nigeria had been robbed by poor refereeing already this tournament, as Zambia’s late equaliser in the previous match came from an incorrectly awarded penalty from an official since sent home. And again they were the victims, with Ethiopia somehow avoiding having several men sent off for desperate tackles, while Biadgelegn Elias was about to be shown a second yellow card when Morocco’s Bouchaib El-Ahrach appeared to change his mind and give a final warning. From the resultant free kick Super Eagles defender Kenneth Omeruo fired over from close range and it was goalless at half-time. Ethiopia made two half-time changes, in keeping with the decision of coach Sewnet Bishaw to go for broke.

They started the second half well too, adopting a direct approach as Said caused problems and Addis Hintsa shot on sight from range. Indeed, the Walya Antelopes were all over their illustrious opponents as Said was denied a diving header by an excellent block from Omeruo, while Nigeria were feeding off scraps, such as the corners from which Omeruo twice headed over. Hintsa was getting forward more, his passing able to release the likes of Said and substitute Fuad Ibrahim at will. Nigeria could barely string a passing move together as they constantly looked to Mikel and Moses for the Hollywood passes and runs. The other Ethiopia sub, Minyahil Teshome, was also enjoying himself, his trickery getting two Nigerians booked as the two-times champions grew increasingly frustrated.

Keshi decided to withdraw the ineffectual Ike Uche for Ahmed Musa, and while Musa was not involved immediately there seemed to be a boost to the Super Eagles as Abebaw Butako cleared Joseph Oboabona’s header off the line, while Bancha spilled a MBa shot but pounced first on the rebound. And soon afterwards they made the breakthrough as Moses surged into the box from the left wing – he skinned Alula Girma, who slid in recklessly to concede a clear penalty. Moses made no mistake from the spot, putting the ball low to the right as the keeper guessed wrong. The need for a decent goalkeeper was soon highlighted when Vincent Enyeama made a terrific save from Said. Down the other end Bancha, who had started dropping the ball with worrying frequency, maintained his 100 per cent record of red cards at these finals by chopping down Moses after his trickery again carved Ethiopia apart.

A five-minute delay ensued while Hintsa was correctly attired for his new role as stand-in keeper, and he nearly made a remarkable save after guessing correctly to dive left over Moses’s second penalty. Despite being down and out, the gutsy 10 men of Ethiopia continued to attack, with Said twice putting finishes off target in the lengthy period of stoppage time. But there was no stopping the Super Eagles from soaring into the last eight, at the expense of the defending champions Zambia, who were held for a third time these finals as Burkina Faso qualified top of the group.

Moments later, the match is brought to a close in Rustenburg. It wasn’t pretty and it wasn’t a vintage Nigeria display. But do they care? Probably not. A game of very few chances, Nigeria dominated possession but Ethiopia’s keeper was rarely troubled, until the second half when the Eagles were given two penalties which gave them victory, after a good penalty-shot by Victor Moses.

Chelsea was defeated by a lone goal during the Premier League late kick-off against Newcastle at the St James Park on Saturday. The Blues had...
Read more
- Advertisement -