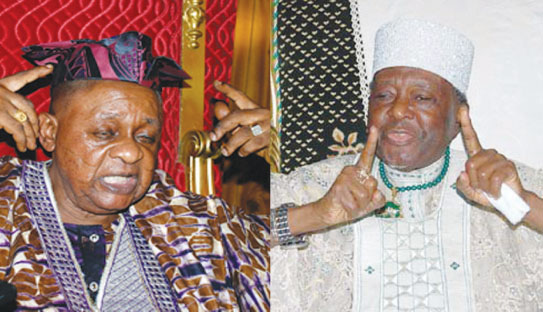 An end might just be in sight to the lingering public spat between Alaafin of Oyo, Oba Lamidi Adeyemi and Ooni of Ife, Oba Okunade Sijuade as the former waved the white flag, weekend, saying, he was ready to attend any meeting with prominent royal fathers that would lead to enthronement of peace among them.

The reverred monarch gave this indication when the Olugbo of Ugbo Kingdom in Ilaje Local Government area of Ondo State, Oba Fredrick Obateru Akinruntan, Okoro Ajiga 1, paid him an sympathy visit over the fire that gutted a section of his palace.

According to him: “It is only a person that is having something to hide that will not want to hold meetings. I’m ready, for the sake of our people, because where two elephants fight, it is the grass that suffers.”

Oba Adeyemi also recognized the mediatory role played by the Olugbo in ensuring that Yoruba Obas live in unity and oneness.