The 41-year-old Texan admitted to talk show host Oprah Winfrey last week that he took performance-enhancing drugs during his cycling career, but insisted he did not deserve a life long ban. 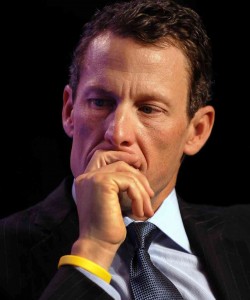 “Hell yes, I’m a competitor,” said Armstrong, when asked if he wanted to compete again. “Frankly, this might not be the most popular answer, but I think I deserve it (to be able to compete again).

“I deserve to be punished. I’m not sure that I deserve a death penalty (a life ban).”

Critics have slammed the former holder of seven Tour de France titles for the limited nature and timing of his apologies, but Johnson, suspended for taking steroids at the 1988 Seoul Olympics, told the BBC: “American people will forgive him.

“I think people will judge him differently, based on what he did for humanity and for cancer.”

The US Anti-Doping Agency banned Armstrong last year when they uncovered evidence of systematic doping by his USPS/Discovery Channel professional cycling team, calling it the “most sophisticated, professional and successful doping programme that sport has ever seen”.

Walsh’s long-time campaign to expose Armstrong was vindicated when the US Anti-Doping Agency confirmed his drug use late last year, prompting Armstrong to confess on American television.

The American said he would consider apologising to Walsh, against whom he had launched a number of personal tirades, particularly after his 2004 book LA Confidential contained allegations about the rider.

Walsh said: “I know this is going to sound preposterous but I felt a little but of sympathy for Armstrong. Intellectually he had to be remorseful, but emotionally he couldn’t do it.

“Basically, Armstrong knew what he had to do but he wasn’t capable of doing it because obviously he’s got serious personality issues. Lance needed to look remorseful and repentant and you would see a flicker of a smirk crossing his face, and he didn’t mean to do that – it was involuntary.”

Another disgraced former Tour de France winner, Albert Contador, waded into the saga following his August return from his own doping ban.

The Spaniard said: “Nobody was surprised by what he said. It’s hard for the image of cycling, but I want to take what can be good – maybe we can close the chapter of this decade and focus on the present and the future of this beautiful sport.”