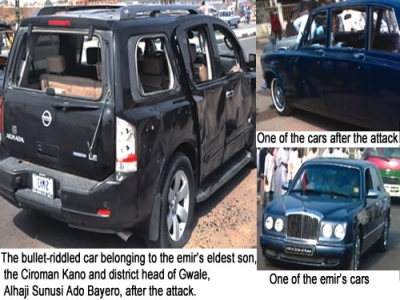 Governor Rabiu Musa Kwankwaso of Kano state, has described Saturday’s attack on the Emir of Kano, Ado Bayero, as ‘sad and condemnable.’ Kwankwaso made this known in a statement by his assistant on media, Jaafar Jaafar.

The statement said the governor made the remarks while addressing newsmen after paying a sympathy visit to “the Emir of Kano Alhaji Ado Bayero over attack on his convoy, which led to the death of three palace guards.”

While expressing gratitude to God for the emir’s escape, the statement added, “Governor Kwankwaso described the incident as both unfortunate and condemnable.”

“I’ve just met the emir in good condition and I sympathized with him over the loss of three of his staff. We discussed at length over the issue. We thank the Almighty Allah that the emir is unhurt,” said the statement.

“While praying for the repose of the souls of the slain guards, the governor wished others who sustained various degrees of injuries during the attack quick recovery.”

Also, while confirming the attack, spokesperson of the Joint Task Force in Kano (JTF), Captain Ikedichi Iweha, said the emir came out of the attack “hale and hearty,” adding that investigations had already been launched.

“As I’m talking to you, operations and investigations are going on and there is progress. We will provide details as soon as we complete what we are doing,” he said.