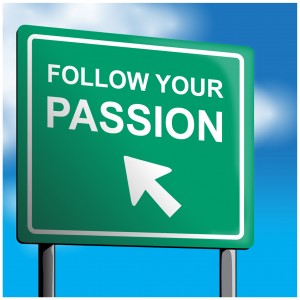 I define passion as the power that comes from within. It is more than a feeling, it is a propelling force of the last resort that comes into play when your natural strength ceases from driving you. It is ambiguous in approach and analyses, but I will try to dissect it in my own little way. It serves as the bedrock of insightful thinking, motivation, invention, innovation, expertise, diligence, professionalism, to mention but a few.

There is no facet of life you can think of whose prime movers do not fall within this context of discourse, ranging from scientific inventions and innovations, entertainment, sports, finance, to business. It took Thomas Edison several experiments before he invented electricity. If not for passion, he would have succumbed in the course of his numerous trials. Passion makes you think beyond the imminent failure and allow you gather the pieces of your crumbles, amass them, and use them as a stepping stone to higher degrees of glory.

Pierre and Maria Curie never gave up until they discovered Uranium. Although they died in the process, the passion they had bred into their daughter made her continue where they left. Such a feat never only brought numerous posthumous awards their way but brought alongside it the most useful nuclear substance.

With this, there is no gain saying that to get to the peak of whatever you involve yourself in, you have got to find a cause worth dying for, and it is only passion that would afford you the opportunity to test its originality and relative permanence.

Let’s delve a little bit into sports and entertainment. The rave of the moment in football, arguably the best player to ever play soccer, the one who has been ‘merciless’ with all records; Lionel Messi, remains high up there because of the passion he has for the game. He keeps shattering records and setting new ones. Alas in this single entity, we have, the first Argentine world footballer of the year, the first player ever to win the world footballer of the year accolade four consecutive times and he’s the player with most goals (91), in a calendar year as far as FIFA is concerned (because some Africans are contesting with a Zambian’s 126 goals)! He is a delight to watch any day, I keep telling people that what differentiates him from the rest is that he has a micro-processor in his brain, because he would have decided what to do with the ball before he gets it, that’s on a litter note though, but the passion for the game keeps firing him on.

Close to him in relevance is the most complete striker on earth, Cristiano Ronaldo. Report has it that he stays behind after the routine training to try new things on his own, and in him we have a pace reminiscent of a cheetah, wonderful footwork, fiercest of shots from any player on earth at the moment and he has also got aerial prowess, just unlucky to be born into this generation for obvious reasons due to Messi’s wizardry.

Still on football, the best midfielder of all time of English decent, and the best scoring midfielder of all time. Frank Lampard is also up there pertaining to this discourse he’s always behind when others are long gone, he practises new things and all the coaches who have worked with him keep praising him in this regard. Passion has got the best out of this 35 year old that he’s just 9 goals short of equalling Chelsea’s all time goal scoring record.

Andrea Pirlo is also a good example of a passionate footballer, he got people astonished with his skills, vision and purposeful play throughout the 2011/2012 season and he primed Juventus to an unbeaten run throughout their Serie A campaign and took it further with an outstanding performance at the Euro the same year, only bettered by the mercurial Andreas Iniesta.

To Tennis, Andy Murray just won his 1st grand slam last year after several frustrating attempts but passion never made him quit until he wrote his name in gold.

Should we talk about Abraham Lincoln’s adventure? Al Gore’s swap of professions leading him all the way to the Oscar? Nwankwo Kanu’s legendary status in the twilight of his carrier that gave Portsmouth the F.A Cup in 2008 when his contemporaries had fizzled out? Professor Charles B. Soludo winning the world banker of the year as an Economist after his recapitalization policy redefined banking in Nigeria? The list is endless, but due to time and space constraints, I leave you with this magical touch of passion.

Whatever you have ventured into that has been constantly failing, apply passion again and again and feel free to share the testimony to motivate as many as possible. It is a therapy I have tried severally and the results are so heartwarming. See you at the top!