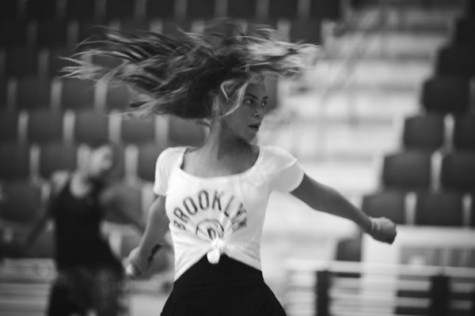 The countdown is on to Beyoncé’s Super Bowl halftime show. With just a week to go, Baddie Bey is revealing more photos from her rehearsals, while not giving away too much. In the latest round of pics, she is seen dancing in a Brooklyn Nets shirt and working on her laptop while seated in the Mercedes-Benz Superdome in New Orleans.

Despite claims that Destiny’s Child will reunite at the Super Bowl, Michelle Williams shot down the rumors. “I hate to disappoint the people and tell them that it’s not true,” she said.

Meanwhile, some media outlets have been given an advance copy of Bey’s HBO documentary, Life Is But a Dream. In the intimate film, the private superstar opens up about her marriage to Jay-Z (“It’s every woman’s dream to feel this way about someone”), her miscarriage from two years ago, and rumors that she had a surrogate carry Blue Ivy.

“There’s a stupid rumor. The most ridiculous rumor I think I’ve ever had about me. It’s crazy. To think I would be that vain—I respect mothers and women so much and to be able to experience bringing a child into this world, if you’re lucky and fortunate enough to experience that, I would never, ever take that for granted. It’s the most powerful thing you can do. Especially after losing a child, the pain and trauma from that just makes it mean so much more to get an opportunity to bring life into the world. It seems like people should have boundaries,” says a visibly upset Bey (via USA Today).