Four months after 39-year-old Janet Odhegba was set on fire by her jealous husband, Kehinde Adesanmoye, in Ikotun, Lagos State, she has yet to fully recover from the burns she sustained after the incident. 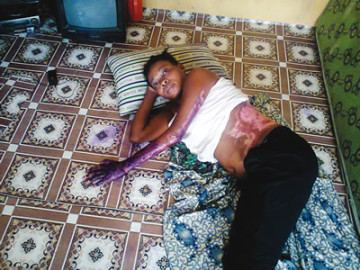 At the moment, paying her medical bills is a great challenge.

Adesanmoye had on September 11, 2012, around 10pm allegedly poured petrol on Odhegba and set her ablaze at the Ikotun Roundabout, Lagos, where she worked as a food vendor.

Odhegba allegedly drew the ire of Adesanmoye the previous day after taking a wine offered to her by one of her male customers at a party where he (Adesanmoye) also attended.

The victim said her relations and community association members who had hitherto contributed money for her medical treatment said they could no longer afford to foot her medical bills.

She said they were contemplating an out-of-court settlement with Adesanmoye so that he could take responsibility for her treatment.

Odhegba said, “Life has not been the same with me since the incident I suffered in the hands of my estranged husband and I have yet to fully recover.

“More worrisome is the fact that my relations and my township association members are mounting pressure on me to embrace an out-of-court settlement with him.

“This is premised on the fact that they have been stretched to the limit in terms of assisting me financially. They have really tried because I don’t know if I would have survived it without their help.

“But, I don’t like the idea of the settlement because I really want him to face the full wrath of the law for the inhumane treatment and assault he meted out to me.”

According to a medical report signed by Dr. Kupoluyi Oluwatobi, the medical officer-in-charge of the private hospital where she was being treated, Odhegba needs to undergo a “split skin grafting by a plastic surgeon for complete wound healing.”

Odhegba said since she was discharged from the hospital because of her inability to pay the bills, adding that she had been using different traditional methods to aid the healing process.

She said, “I now adopt traditional methods for treating the wounds based on advice since I cannot afford hospital bills.

“The wound on my left hand has made my muscles to go stiff and I can no longer hold things.

“Apart from the skin grafting, doctors have also recommended that a team of physiotherapists need to work on me for the purpose of rehabilitation. I wish Nigerians could help me so that I won’t be forced to withdraw the case on lack of finance.”

Her mother, Mary, said she had spent everything she had to make her daughter normal again.

“I have sold all my property back in my village in Ozoro, Delta State. Since I moved to Lagos to oversee her welfare, all the crops I cultivated to earn a living have been completely destroyed. There is no source of getting money from anywhere again,” she lamented.