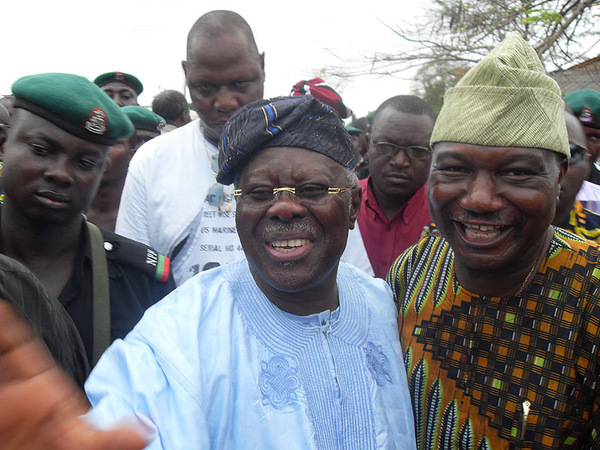 An ex-convict, Chief Bode George, was recently appointed into a panel to reorganise the Peoples Democratic Party, PDP’s, Board of Trustees. Following this development, the party has come under severe criticisms from various angles. Legal practitioners as well as civil rights groups, Anti-Corruption Network and Coalition against Corrupt Leaders, on Sunday, condemned the PDP’s action, saying the party had no respect for the public.

The Executive Secretary of ACN and former member of the House of Representatives, Mr. Dino Melaye, and the Chairman of CACOL, Debo Adeniran, said the PDP’s decision was akin to legalising corruption.

According to Melaye, “Almost everybody in the party (PDP) is an ex-convict, only time will tell. The party is about corruption, so corruption and corrupt persons mean nothing to them. He (Bode George) is still carrying our national honours and so you can see.”

On his own part, Adeniran said, “Nobody is expected to associate with a corrupt convict that has not been discharged of the burden of guilt because such people will not do anything to discourage similar crimes… He is not going to discourage people of doubting integrity from assuming office as a political leader. By implication, such characters will infest others with the criminal virus because he exemplifies corruption. And since like begets like, whatever decision taken by any committee he is a member can only be seen as lacking in integrity.”

However, some people differed in their opinion on the issue. One of such who stands out is Yusuf Ali, a Senior Advocate of Nigeria (SAN) who noted that despite his conviction, George had the right to belong to, and participate in the activities of a political party.

He pointed out specifically that the appointment was a PDP affair, and that the party was not the Federal Government. Ali said, “The party is not the government. We should not equate the party with the government. Since he belongs to the party, he can function within the party… Even conviction cannot stop somebody from belonging to a group or a trade union. If he belongs to a group, he can take part in the activities of the group. It is different from taking public office.”

It would be recalled that a Lagos High Court convicted George in 2009 for fraud after he served as Chairman of the Board of the Nigerian Ports Authority. He spent two years in prison.